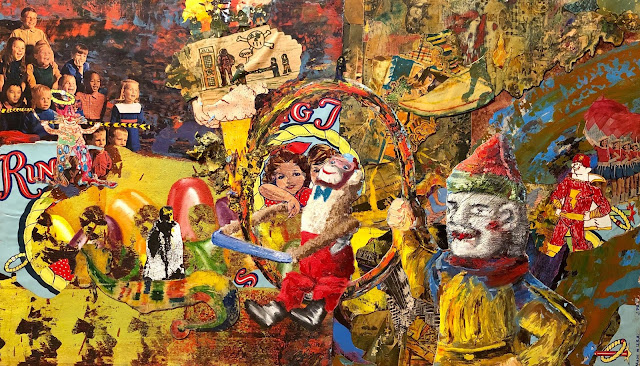 David Jenowe graduated with a Bachelor's degree in Fine Art at William and Mary in 1993. His focus was oil painting, which he continued to explore when he moved to JerseyCity, New Jersey in the summer of '93. "One Eleven," as it was affectionately called, was home to maybe up to a hundred artists all living and working in their studios and exhibiting in various gallery spaces both within the building as well as the art community of Jersey City. After living in New Jersey and apprenticing for a time with the artist Bill Barrell (of the NYC Rhino Horn group from the 1970's), he got a job at Christie's Auction house in New York City where he was handling a lot of contemporary art, as well as pop cultural props, and hanging a lot of art shows and took classes at the New York Studio School from Robert Beauchamp among others and during that time his father opened up a gallery in Omaha, Nebraska called Lakin Jones Gallery. Since his father was having some success selling artwork from local Omaha artists as well as some of the members of the aforementioned Rhino Horn group, he then began selling David’s work as well, and it wasn't very long before he convinced him to move to Omaha in '97 where he’s been living on and off ever since.

He has been re-discovering the magic of oil painting over the last year or so. Currently he mostly works with oil and collage, sometimes enamel drips, with the collage including all mediums and all former scraps of previous paintings, and even some of his early kid drawings. His work can be described as a blend of surrealism, phantasmagoria, horror, as well as whimsy. He is forever trying to surprise himself, and collage has a way of radically changing a piece both visually and symbolically with each addition or subtraction, to which he responds with paint in an instinctive and improvisational manner. Each painting is an event, a dialogue happening, a relationship forming, and it will unfold before his eyes, and preserved at it's zenith, for others to witness and hopefully enjoy as well. He truly believes that in surrendering one's self (no matter what the practice) to the moment as it unfolds, one can experience what can only be described as "magical." It is for this reason that he aspires to allow for imperfections, flaws, and sometimes jolting features, as a part of the raw, fresh, direct transmission of whatever the piece is trying to "communicate." For each piece does indeed have it's own kind of language, it's own set of unspoken rules, and the more he can facilitate the birth of this new "creature," and hear what it has to say, the better, even if it comes at the expense of seamlessness, flawlessness, or some other illusion of surface continuity. This is the nature of collage art, generally speaking, and that there are several layers of disjointed dimensions all playing together on a flat surface. He enjoys the push/pull relationship of color, texture, value, and mediums, and feels there are many layers all working together, often behind the scenes, so to speak. 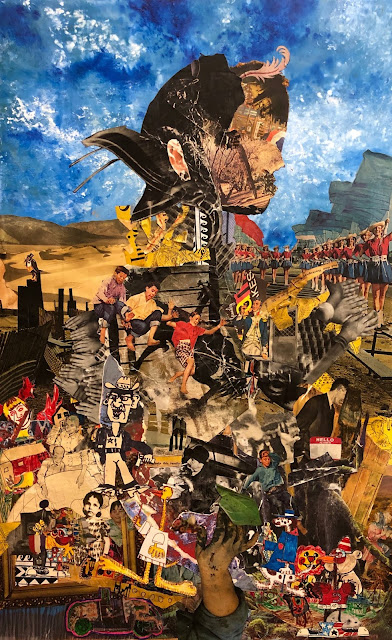