THE “GAMES” OF EVA GYORFFY - MATERIALS AND SURFACES 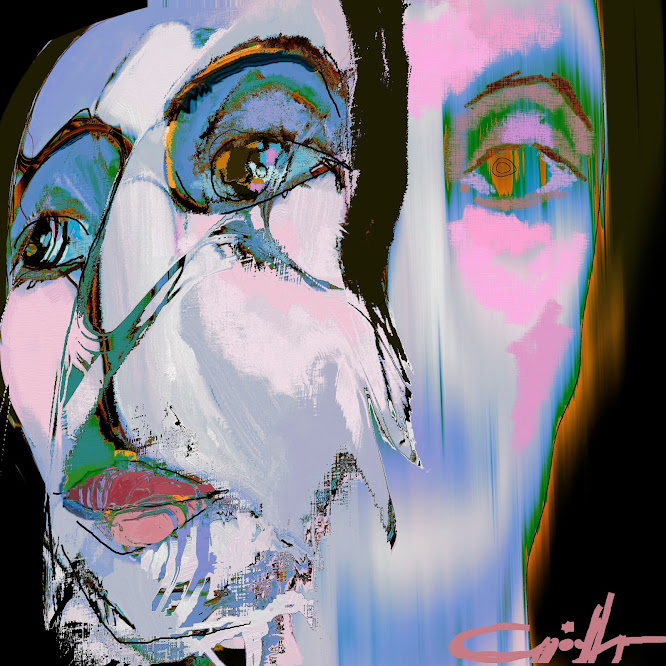 Portraits "speak" rarely. They make noise with their shapes and colors but do not say anything worthwhile. Too many artists forget indeed that only the light thrown on them, creates them. Eva Gyorffy produce it not from  outside but by the induced projection through the electronic screen which gives it its visibility. This is indeed one of the great revolutions of digital art: the light comes not from without but from within. As the works of Hungarian artist . Outgoing faces (and sometimes landscapes) of the punch of nostalgia that subjects always the image to the submission of something of the past under the pretext of getting rid of the most unknown part of themselves, the artist shows the complexity behind each appearance, hide by effects of hybridization and duplication. The image is no longer a reflection: it moves to re-find the real, identifying from several sides the loss, leaving the field open to anything that might happen.
By reviving the figurative and a particular form of "realistic painting" the artist shifts by both hybridization and stylization. The dogmas of the aesthetics of different times and places are mixed but distance themselves through works that look more precisely and with wide eyes as they disturb (all senses). The work requires special attention. Otherwise, the risk is great to miss. The essence of the figuration within the artist's work pushes indeed a door, not in the direction of onirisme but against a "lynchéeene" vision of the things. A representation that opens in a re-presentation: without this drift art is nothing but a decoration.
Creating a bridge between reality and what escapes to her, Eva Gyorffy plunges into a world that is both open and closed. Accordingly, if the representation is law, we are far from realistic. Therein lies the required trap chosen by the artist to confound and confront what it is to be in its relation to reality and his own image. The devil of reality is after us but got caught up in a formal universe in search of the algorithm of the image which takes the being out of his house to a recall and a nifty return. Showing the outside the artist slid into the inside of this intimate place. Therefore, faced with a rise of the power of nostalgia for the moral order, always quick to get out of our memory reserves the censorship machines,  Eva Gyorffy, never orphan on prior art sources, marks a decisive  stage boldly, but without the violent gratuity of an "obscene" evidence . She organizes a more operational strategy. Her approach beyond the provocation or artificial expression, casts a harsh light on places that affirm dualities. Such a set assume a fine sense of aesthetic strategy. And working on the image as mental and psychological construction that aims to produce effects on subjects, Gyorffy Eva shows how the artist can embody on the "raw" digital projection a unique projection power in her spatializations and her manners to occupy the scene. The image effect can not be confined to a pure interiority. And the artist shows how any representation crosses the concept of screen. This is primarily a surface intended to protect something or someone. In this sense it masks, veil to prevent intrusion. But it is equally a surface that allows the projection of images in the broadest sense of the term. The artist shows how the screen at once conceals and enables transparency in the heart of a programmed opacity.
Her work illustrates how the techniques create a subtle dialectic. A screen of one form or another never reveals itself neutral: human perception and consciousness are thereby radically changed. In this sense, taking the old rules, the artist imposes a paradoxical iconography of modernity. Not trying to make something new for the brand new, never being content to exploit imagery on which he could rely, Eva Gyorffy develops a universe as mental and physical of her own. We face an exciting work able to develop our curiosity about everything that we generally fits into the everyday world. Avoiding any symbolic (the convenience of painting) and using strong colors and staggered intermissions, emerges a vagrancy. The works plays on a necessary ambiguity and a shift. She makes the viewer to be both free and magnetized.
Crossing borders the Hungarian artist, ignore the adjectives which describes her entreprise: no matter if realistic or fantastic. She keeps the power to go to what is not seen yet and to distance herself of reflection- images by multiplying overlap, hybridization, unexpected approaches offering  opponent shots to patterns of seeing, to understand the be , the world and their relationship to each other. The creator reaches more complex lines but devoid of any emotion dummy. De-multiplying images enable to see and not to believe to see as they disquiet by probing the dim light which the eye can no longer simply "ask". Gyorffy Eva knows that art does not posesse the world but it can draw it other contours. It separates, dislocates, cares of ideas, feelings, images whatever the apparent singularities may be. 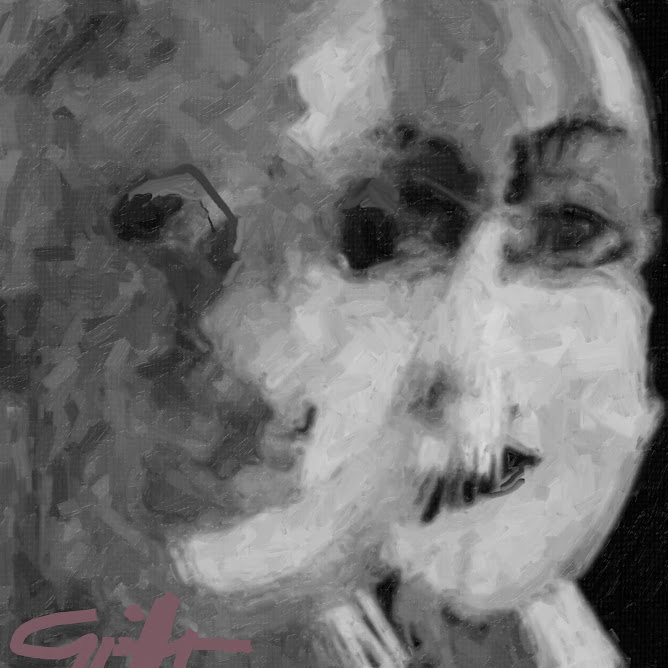 homo ludens - I started my computer with an exclamation -I thought I'd play a little - then all of a sudden it turns out - nothing is a game in life - the child doesn't play either - everything is deadly serious - it's just us babbling- people on the street - colours - lines - shapes - feelings - old faces - new faces - encounters - memories - mirrors - paintings on the computer - computer paintings - to paint in the computer is a lengthy creative process - to find the most authentic expression of the experience - encounter - remained in the painter -the memory of the encounters - line - circle - geometry - abstract and non-abstract forms - shapes - math - space-filling fantasies - order and mess - however - the portrait is different - the reality of the representation, a gift of the years at college - transforms - into an emotion - into a thought - into a mirror - and the mirror is fragile - pieces of the mirror of my soul - your soul - you, who stares at the eternity staring at the canvas - 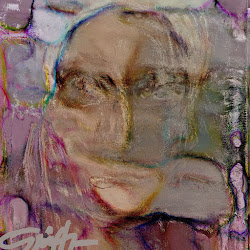 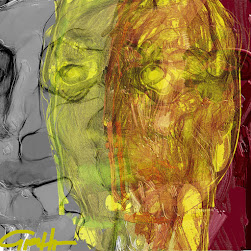 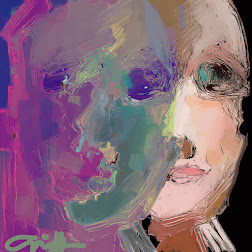 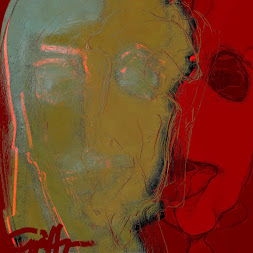 1951 - She studied painting at the “Ion Andreescu” University of Fine Arts in Cluj-Napoca, her teachers were Tibor Kádár, Harsia Teodor and Abody Nagy Béla

1997 – Discover of the artistic potential of the computer. She leaves the traditional studio and works almost exclusively by digital means

1997 - present – Eva Győrffy lives and works in Amsterdam, the Netherlands

Éva Győrffy's works can be found in museums in Arad and Timisoara and in private collections in Romania, Hungary, Germany, Belgium, Italy, France, the Netherlands, Sweden, Israel, Canada and the United States.